Houdini - Down on the Farm

Happy new year! It has been a while since I've posted anything new, but here is an interesting story I found on Houdini. I don't recall hearing it before. It's from the POUGHKEEPSIE EAGLE (Dec. 28, 1925). 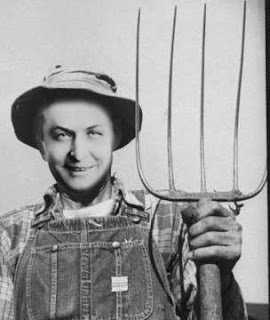 "In country parts, where men themselves perform the magic of making the soil bear harvest. I've found them less gullible.” He wrote in an article published yesterday by Farm & Fireside. “They know it’s just a trick.”

Houdini’s first training in legerdemain was in the small towns, with travelling shows and later as a magician at county fairs. As an example Houdini told of an experience in an Iowa town, where he undertook to escape from a thief-proof barn within an hour.

"Finger the locks as I would I could make no impression on them.” he said. "I exhausted myself and leaned against a door section to rest for a final spurt. To my amazement the door opened and the witnesses applauded me. I bowed with grace and-went back to the farm house to dress. The farmer came into the bedroom and explained that out of pity, he had left that section of the barndoor unlocked, unbolted!

HOUDINI will not escape!...

The headline "HOUDINI WILL NOT ESCAPE, O’BRIEN VOWS," splashed across the page in The San Francisco Examiner (Sat. March 17, 1923). The story was accompanied by a photo of the Chief "testing the ribs" of Houdini. It is a photo I had not seen before. 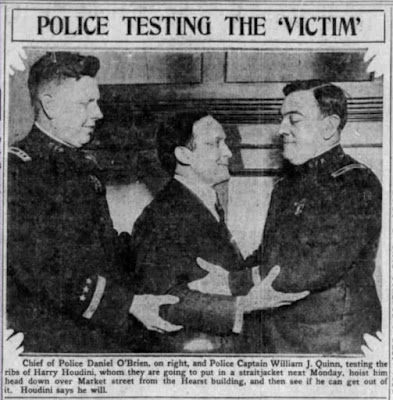 The newspaper article relates the conversation between Houdini and O'Brien...

"How big is your chest contraction?" asked Chief of Police Dan O'Brien yesterday of Harry Houdini, as he felt the ribs of the "handcuff king and prison breaker."

"Well, you'll need all you have after I cinch you up in that strait-jacket on Monday," said the chief. And Captain W. J. Quinn echoed his sentiments.

For they're (sic) hanging- Harry Houdini – high by his feet, over crowded Market street from the seventh floor of 'The Examiner" building at noon next Monday. He will be triced in a straitjacket, and he says he'll get out of it, right in mid-air.

Chief of police O’Brien thinks he will not. Time will tell."

All San Francisco will be there to watch the test. Houdini, on a platform high enough for all to see, will be strait-jacketed in full view. Then he will be hoisted by bis feet. The rest is up to him. And meanwhile he is preparing to open a week's engagement at the Orpheum tomorrow, unconcerned as to Monday's diversion.

"The word "fail" never appeared but once in the bright lexicon of my career, he modestly told Chief O’Brien yesterday. "It was some years ago, in a town in Ireland. I had guaranteed to get out of a triple-locked steel jail cell. They stripped me, and searched me, and then delegated a big husky sergeant to lock me In. I heard the door bang, and I went to work. But I couldn't move the bolts. I tried every way to pet those bolts back, as I had done hundreds of times. Outside in the corridor waited the doubting officials all but the sergeant. He stood in front of the cell. Suddenly the door swung open, and he whispered:

"What’s the matter with ye? I was sorry for ye and so I didn’t lock the door.'

"And there I was trying to pull bolts that hadn't been set." But there’ll be no "sympathy" next Monday, says O'Brien. And Houdini says he doesn't want any. The tighter they tie him, the better.

Will he do it?

Of course, Houdini did escape, and the story became another entry in the saga of the master mystifier.
Posted by Chuck Romano at 10:01 AM 3 comments: 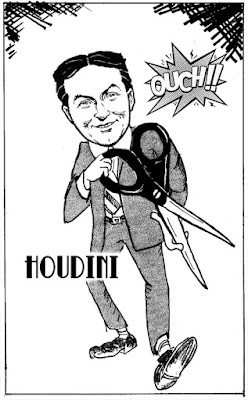 I found an interesting bit of information about a Houdini mishap at an Orpheum Theater show in California. Thayer's The Magical Bulletin of Jan. 1916 reported, "HOUDINI met with a peculiar accident while playing at the Orpheum in this city. While doing his Turban trick, Houdini holds the cloth for a gentleman from the audience to cut. On this occasion the gentleman jabbed at the cloth with the scissors and made a severe cut in Houdini's hand. Houdini was forced to drop this trick from the act and wear a rubber glove in his escape."

Houdini wasn't the first, or the last, to have a scissor mishap. David Copperfield accidentally cut off the tip of his finger with sharp scissors while doing the Cut & Restored rope in the 1980s. The audience thought it was part of the show, but he had to be rushed to the hospital and the fingertip was reattached.
Posted by Chuck Romano at 10:09 AM 1 comment:

The Expert at the Card Table (Study Guide) 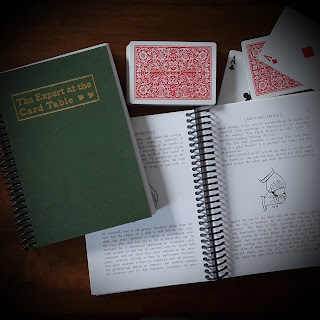 Looking for a high-quality copy of Erdnase that is easy to study? Look no further than this new unabridged edition that is affordable and easy to read.

No need to hold the book down with one hand and a deck of cards in the other. This copy of The Expert at the Card Table is coil bound so it lays flat and is the perfect solution for the student. Every word and drawing is there and it is a beautiful reproduction of the original 1902 book. The book is printed on a heavy 100# paper with a 100# cover that mimics the original.

This is the perfect addition to any student or collector's library. Get your copy today! 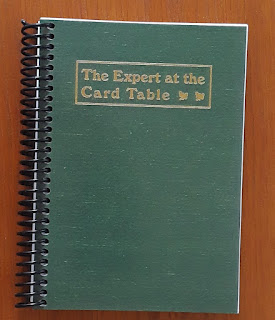 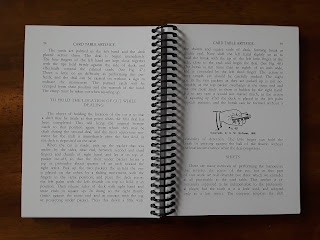 I really enjoy John Cox's Houdini site - WILD ABOUT HARRY. I heartily recommend it anyone interested in Houdini. Every time I visit the site I have the urge to look back at some old Houdini story or delve a little deeper into some new item John has dug up.

Recently there was an entry on Houdini's grave site in Machpelah Cemetery. I found a story in the November, 1927 issue of The Sphinx magazine that goes into some detail of the materials used to construct the Houdini monument and exedra.

The story describes how the original Houdini bust was cut from Carrara, Statuary Marble. The famous Michelangelo statue of David is carved out of white statuary marble. This type of marble is 98% calcium carbonate and often has little veining, making it ideal for sculptures and statues.

The Sphinx reporter wrote that Houdini's bust was carved by A. Merli. My research has uncovered the sculptor's full name was Amadeo Merli (shown below). Merli, along with Alex Nicolai, conducted business from a studio at 23 Macdougal Alley in New York. One of the studio's better known commissions was carving the six figures for the pediment of the New York Public Library on 5th Avenue. 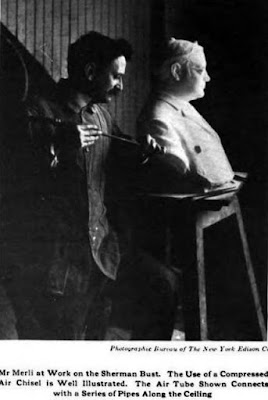 The SAM emblem was a Mosaic imported from Venice, Italy, by C. Francini. Unfortunately, I couldn't find out more information on this element of the exedra.

The large monument itself is made of Barre Granite. Barre is a fine granite, composed of quartz, fedspar, and mica. This work was done by The Adler Monument and Granite Works, Inc. at 148 East 57th St. The records I found showed the firm operated until 1986. 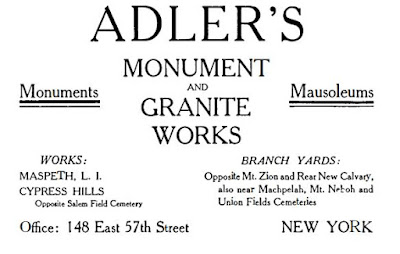 It is well-known that Oscar S. Teale, Architect, and a Past President of the Society of American Magicians, designed the original exedra, as well as the added features after Houdini's death. Teale is shown below at the grave site. 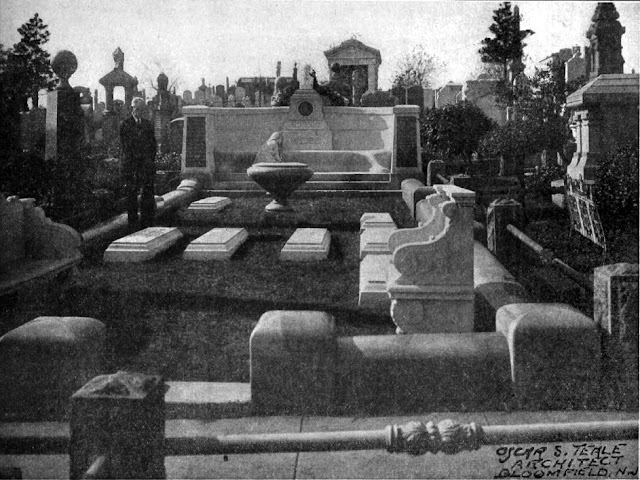 I have never been to Machpelah Cemetery, but maybe someday I will have the experience of visiting the final resting place of the great Houdini.

Houdini and Jennie the Elephant (and Lucy, and Fanny)

In the Spring of 1922, Houdini was at the Times Square Theatre promoting his film, The Man From Beyond.

The Evening Telegram - New York newspaper from April 8, 1922 reported, "After the film Houdini appeared in person on the stage and went through his many mystifications. He makes a lady disappear. He gets out of a straight-jacket that is seemingly impregnable. He swallows four packages of needles and then he swallows the thread and presently produces that same thread from his smiling mouth with all the needles duly threaded.

“No wonder he has nerves of steel” commented the girl in the front row.
Finally, he makes an elephant disappear. Of his two elephants, only Lucy came on for her act. Fanny was captivated by the bright lights of Broadway and refused to enter the Times Square Theatre. Meanwhile, Lucy suffered from an attack of temperament and liberal rations of gum drops were necessary before she could be induced to do her act."

Lucy? Fanny? I never heard of these two pachyderms, only Jennie. Anybody else know if this was just a reporter's embellishment or a fact? 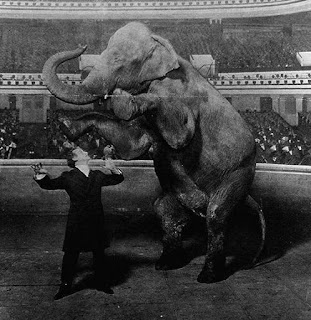 The Houdini and Chaplin Seance 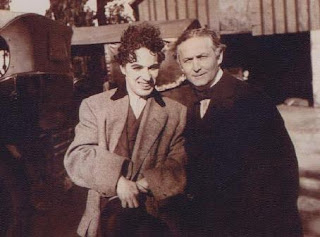 Charlie Chaplin and Houdini were two of the 20th century’s most iconic figures. The well-known photograph of Houdini and Charlie Chaplin shown above is believed to be taken in 1915 during a visit to the studio by Houdini. Unbeknown to me this wasn’t the only time the two men met. In fact, Chaplin is said to have attended a seance conducted by the great Houdini in the Hollywood hills.

E.J. Fleming reports in the book, Paul Bern: The Life and Famous Death of the MGM Director and Husband of Harlow, that in July, 1921, Houdini was in Los Angeles working on The Soul of Bronze. Houdini enthusiasts will recognize this title as the Georges Le Faure short story Houdini acquired with plans to distribute through the Houdini Picture Corp. Little is known about the film.

Houdini met the silent film star John Gilbert (1899-1936) in 1921 while working and living in Hollywood. Ironically, Gilbert would go on to play a Houdini-like magician/escape artist in The Phantom of Paris (1931). Houdini was living in Laurel Canyon and Gilbert lived as a guest in a mansion nearby on North Kings Road in Beverly Hills. The mansion was actually the home of Carey Wilson and Paul Bern.

Wilson (1889 –1962) was a Hollywood screenwriter and producer of such films as Ben-Hur (1925) and Mutiny on the Bounty (1935). He also was one of the thirty-six Hollywood pioneers who founded the Academy of Motion Picture Arts and Sciences in 1927. Paul Bern ( 1889 –1932) was a director, screenwriter and producer for MGM.  He famously wed Jean Harlow in 1932, and two months later, he was found dead, the victim of an apparent suicide.

The trio of Bern, Carey and Gilbert were notorious around town for womanizing and hard-drinking. Nevertheless, they were also very inquisitive and educated. One of Paul Bern’s interests was spiritualism and the afterlife. Charlie Chaplin lived down the road from the Kings Road mansion and would often visit.

Reportedly, Houdini was invited by John Gilbert to come to the home and entertain some guests, including Chaplin, with a pseudo seance in 1921. During the course of the evening a table lifted off the floor, shook and crashed into the wall pinning a terrified Gilbert. Of course, Houdini explained it was all just a trick and explained how it was done.

Paul Bern: The Life and Famous Death of the MGM Director and Husband of Harlow - E.J. Fleming